A Local’s Guide to Hikes in Tenerife

Tenerife is covered in beautiful paths that lead through stunning landscapes. If you tried to walk every single one of them, you’d be walking nonstop for months, if not years!

To help you out with the countless offers and options, we have created a list of the most unique and most popular trails Tenerife has to offer. We will try to give you an idea about the level of difficulty as well as a map or detailed description and, if needed, a link to the website of one of our favorite tour guides.

Hiking in the North of Tenerife

The North offers the most beautiful views and landscapes of the island. Due to the higher volume of rain, it is a lot greener and the vegetation is more varied here than in the South.

The coastline in the North has stunning cliffs and rock formations to discover. The following routes offer the greatest views and best hiking experiences in the North of Tenerife, in our opinion.

An easy hike along the coastline of Los Realejos

On this hike, you will get a good view on the coast line of the north with its spectacular rock formations as well as a wide range of vegetation. The highlight of the tour is the ruins of an old pump building called Estación de bombeo de la gordejuela or in short Casa del agua.

Starting at the Maritim Hotel, which is the big blue building just behind Loro Parque, coming from the center of Puerto de la Cruz, you will find a path that leads you to the rock formation “Los Roques” which emerges from the sea, very close to the coast. Following that path, you will end up in the streets of “La Romantica 2” and following the signs that point to “San Pedro” also cross “La Romantica 1”.

Once you pass a blue building, you are on the hiking trail along the coast again, which you will stay on until you reach the “Rambla de Castro”, an area that is being taken care of beautifully in terms of vegetation. Above this area, you will find the viewpoint “Mirador de San Pedro” with a small restaurant. From there, you can either take a bus or taxi back to town, or you get a drink and tapa at the restaurant to regain your strength and walk back the same way. 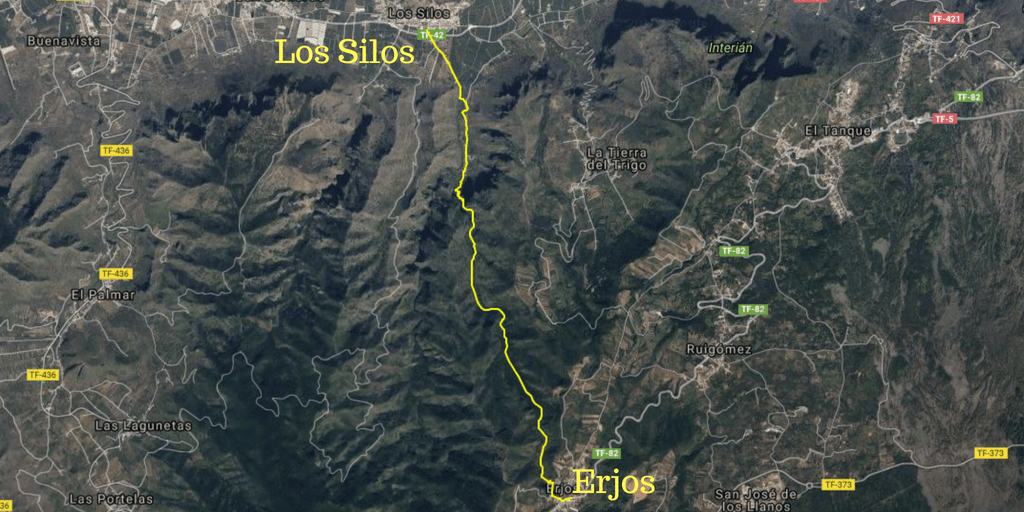 On this hike, you will witness the different climate zones that Tenerife has to offer and the varied vegetation that comes with it. The path also leads you to the “Cuevas Negras” or “black caves” which is yet another impressive volcanic construction on the island.

It’s important to note that the trail is pretty steep almost the entire way, the entire route takes around 3 hours, so decide for yourself which route works best for you. It is likely that you will be in the clouds when you’re in Erjos, so bring warm clothing. From both directions, there’s signs leading the way. The path is called PR TF-53.

If you’re staying in Puerto de la Cruz, you will need Bus 325 to go to or leave from Erjos and Bus 363, going from Taoro Park in Puerto to Los Silos and vice versa.

A walk along young volcanic land from recent eruptions

The Chinyero eruption is the most recent eruption that took place in 1909, causing the volcanic landscape there to be the newest on the entire island.

On this circular route, you will see lava flows as fresh as can be and also pass the pine forest. If you download the app “Everytrail”, there’s a trail you can follow. Here’s the link: http://www.everytrail.com/guide/chinyero-circular

If you have a car, the recently constructed pass along the coast of El Sauzal is a nice short walk suitable as an afternoon activity. It offers solid ground to walk on, beautiful views of the sea and the coast and a few signs that show the old fishing towns that used to be located in the rock formations. You will also have a view of “Esqueleto”, the ruins of an old hotel that has never been completed.

Hiking in The Anaga Mountains

The Anaga Forest is known to be one of the highlights of the island and offers countless trails to discover. It looks like a forest from a fairy tale and has a mystic sense to it when walking through it. You will feel the fresh air and smell the trees around you. It’s a truly revitalizing experience. From the countless different hikes one can do in the Anaga Forest, here’s our selection:

A moderate 10.4 km hike passing by the cave houses that the Guanches used to live in

On this approx. 10 km long hike, you will start out in the Anaga forest and spend the first 1-2 hours walking through the woods, before entering a new climate zone with divine vegetation and auburn colored rock formations. You will be going downhill almost the entire time. Going in direction of Punta del Hidalgo, you will have the option to pass through Chinamada, which is an old town that demonstrates how the natives, the old Guanches, used to live in cave houses. It’s definitely worth the detour.

The hike starts at the meeting point Cruz del Carmen. There, you will find free parking, a restaurant and a viewpoint. If you come by bus from Puerto de la Cruz, take the bus 102 to La Laguna and from there the bus 076 or 077 to Cruz del Carmen.

On the right hand side of the restaurant, you will find a sign with multiple paths pointing to Punta del Hidalgo. Follow the path PR TF 10. Right before the town of Chinamada, you will be given the option to take the mentioned detour called PR TF 10.1, which will lead you to the cave houses and back on the original path. Once you get to Punta del Hidalgo, the Bus 050 will take you back to La Laguna, from which you can either pick up your car or take the bus back to Puerto de la Cruz.

(If you choose to go by car, we recommend parking it at the bus station in La Laguna. That way you can take the bus 076 to Cruz del Carmen to get to the starting point and later on the bus 050 to get from the Finish back to your car. It’s the shortest option.) 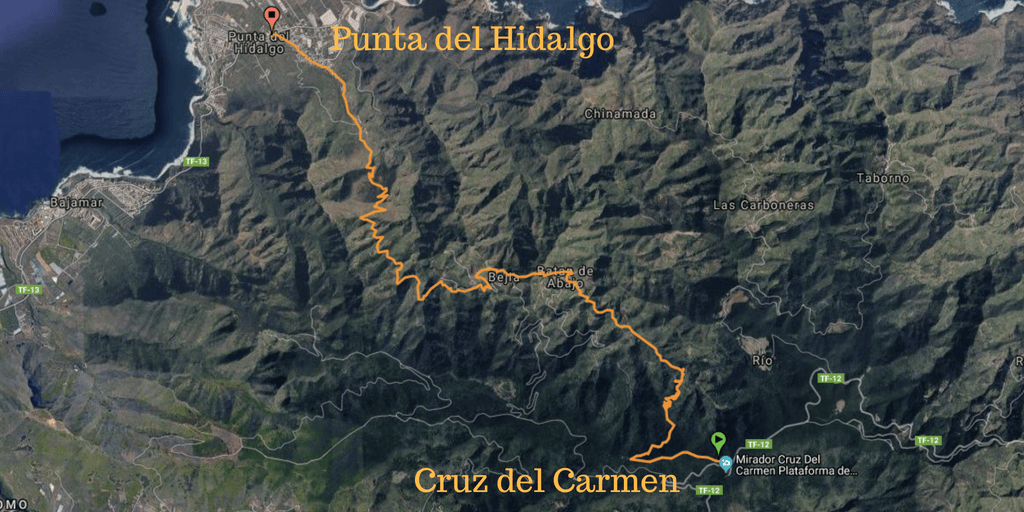 Passing through tunnels and walking in old water canals – nothing for people with vertigo!

On this 6-7 hour hike with a distance of approx. 12.7 km, you will experience a lot of difference in altitude, going down the hill with an occasional mountain to climb. You will start out at the Anaga Forest and walk through the woods the first 1-2 hours, before reaching the small town Batan, where you will have to go up and over the mountain on the left hand side. On the top you will find a spectacular rock formation. Then, going down the mountain on the other side, you will be walking on a normal road.

Watch out for a red bunker on the right side about 50 meters from the road. There’s a footpath leading to it and once you’re there, you will find a small trail going through the valley which will be 80% covered in plants. If you follow that path, you will reach the entrance of the Bejia Canal.

For the first tunnel, you will need a flashlight because of its length. You will be able to walk upright the entire time. Walking in the water canal, you will have a spectacular view on the steep valley and the mountains on the other side. It is not dangerous but it’s also not for you if you are afraid of heights. Once you leave the water canal, stay on the trail on the left to go over the mountain ahead of you and finally walk down to Punta del Hidalgo. The descent will be very steep and hard on your knees.

Just like the hike mentioned above, you will start at Cruz del Carmen and finish in Punta del Hidalgo. But instead of taking the trail PR TF 10, you will follow the signs of the trail PR TF 11, at least until you get to the red bunker. The tunnels are part of a detour that is not listed as an official trail. You will automatically get back on the PR TF 11 trail once you leave the water canal though.

This hike follows the trail that used to be the only connection between Taganana and La Laguna / Santa Cruz. You will start at the Casa Forestal and just follow the path, constantly turning left and right due to the many bends that the trail is famous for. On this hike, you will be in forest the entire time and be able to take in the full range of the vegetation of the North. It is a nice 2.5 hour hike with a distance of about 4.5 km.

To get to Casa Forestal, you can either take the bus 102 from Puerto de la Cruz to La Laguna and from there, switch to the bus 076 which will pass the Casa Forestal directly, or, if you go by car, stay on the road TF12 and watch out for signs pointing to the “Casas de las Cumbres”.

Hiking in the South of Tenerife

The south has completely different scenery to offer than the north. Most of the year it is much warmer and much drier, at least along the coast. You won’t find as much vegetation on most of the hikes in the South of Tenerife, but you will get a different feeling for the island and its variety. The hikes listed above are definitely some of the most beautiful ones on the entire island.

If you are into hiking, this one is a must for you. It is Tenerife’s most famous and most hiked trail. On this 3-4 hour hike, you will descent into the impressive gorge of Masca and be surrounded by massive stone walls. You will walk along creeks that have originated from the melt water from the Teide and over rocks that are as smooth as can be from the water flows that passed through this gorge hundreds of years ago. At the end of this hike, you will reach the Masca beach where you can go for a swim and either take one of the boats that will bring you to Los Gigantes or go back up the same way. Only go for the second option if you are in good shape though.

The hike to the Barranco del Rio will take you approx. 5 hours as you will have to go back the same way you came and has an intermediate difficulty level. You will see the many faces of the South, including dry desert-like zones, a few surprisingly green spots and, as a highlight, the still running waterfall Barranco del Rio. It is one of the more diversified hikes in the South.

To get there, you will need a car. Take the Exit “Chimiche, El Rio” from the TF1 which is the main highway in the south and follow the signs leading to “El Rio”. The road should pass by a church and end in a parking lot, where you can park the car and start following the trail.